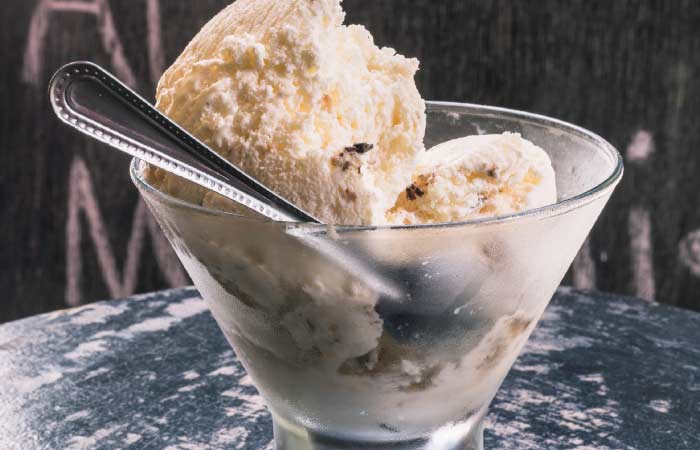 Street 308’s latest new-kid-on-the-block, Yumi Ice Cream, is hoping to tap into the after-dinner crowd with the lure of cheap cocktails and fresh ice cream. Editor Marissa Carruthers and photographer Enric Català try it out.

Sandwiched along the bustling stretch of Street 308 that is home to stalwart eateries, such as Luigi’s and Mama Wong’s, Yumi Ice Cream is in the prime position to deliver its mission of offering the perfect way to polish off a meal: tasty cocktails and really good ice cream, both at really good prices.

Set in an intimate, simple and unpretentious space, the simplicity of Yumi is what forms part of its homely charm.

Here, no time is wasted pouring over pages and pages of complicated concoctions – instead, the menu sticks to four cocktails, beer and eight changing flavours of ice cream. Although, there is talk of expanding the menu in the future.

With espresso martini, whiskey sour with egg white, salted caramel martini and hibiscus and lime on the menu, we decided to try the latter two.

Don’t expect a fancy affair decorated with fancy foliage or garnishes – remember simplicity rules the roost here – however, do expect dangerously drinkable concoctions that at $2.50 each won’t break the bank.

The salted caramel martini is deceptively good, made from milk and vodka drizzled with home-made salted caramel – sugar, cream and sea salt. Resembling a dessert, it is deliciously rich and creamy, with the perfect balance of sweet and salty, making the drink

Next we opted for the hibiscus and lime mix. Hibiscus tea – made by boiling the leaves twice to extract the taste – is blended with freshly squeezed lime and a shot of vodka, resulting in a refreshing drink.

The hibiscus – said to be packed full of vitamins and minerals – adds a sour tang, similar to that of cranberries, while the lime adds a slight afterbite.

To not try the star of the show – the ice cream – seemed rude so we decided to cleanse the palate with a few scoops of the dessert.

Taking in flavours, such as Earl grey, Saigon coconut coffee with Nutella and midnight snack (chocolate pretzel and brownies), we opted for almond and marzipan.

All of Yumi’s ice-cream is made from scratch, sourcing the finest and freshest ingredients from across Phnom Penh to add to the mix of sugar, cream, milk and egg yolk that makes up the dessert.

The result is a custard-style (or French-style to some) ice cream that is smooth and rich in flavour, with the thick chunks of chocolate-covered toffee bits adding texture to the deliciously creamy ice cream. And with a cone-maker waiting to be set outside, soon crunchy cones will be offered.

With its combination of cocktails and ice cream, it seems Yumi is on the right track to accomplish its mission of offering an affordable and chilled out way to round off the night after dinner on Street 308.