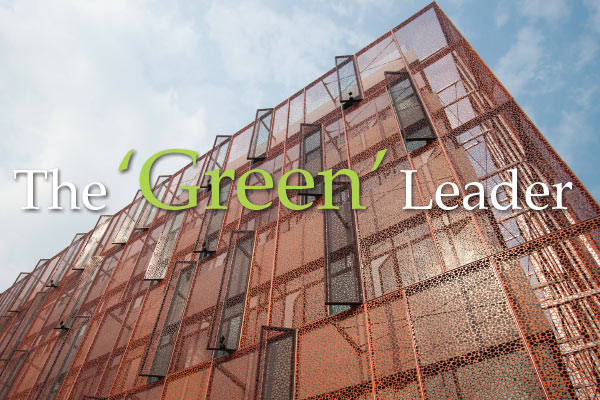 Contemporary Ho Chi Minh City isn’t especially known for its architecture. Most of the old French buildings have been torn down, and many areas of the city look identical, packed with tube houses and hastily constructed concrete towers. But the people behind President Place, located at 93 Nguyen Du in District 1, are working to bring something unique to the city.

Sapphire, the building’s developer, set out to create the greenest building in the city, and their effort has paid off in the form of a LEED Gold certification. LEED is a system designed by the US Green Building Council to determine how environmentally friendly buildings are. President Place is the first building in the city to receive this status.

Philip Cluer, the leasing coordinator at President Place, explained that LEED “is about sustainable use of construction materials, for example trying to source as much material locally as possible.” Nearly everything used to construct the building was made in Vietnam, including the custom steel cladding.

Alex Crane, a senior manager at Savills Vietnam, added, “LEED covers everything from the cubicles to the toilets, and everything has to get approved.”

“During the construction process you have to prove that you’re following LEED criteria. For example, you had to avoid sending anything to a landfill, but Vietnam doesn’t really send things to landfills, so there was no certificate available to say we weren’t doing that,” he says.

He added that teaching their construction workers, only making a few dollars a week, how to do things up to LEED standards was another major challenge — even simple things like not dumping paint into drains.

Despite these hurdles, President Place succeeded in meeting Sapphire’s goal of LEED accreditation. The most visible reason behind this accomplishment is the building’s external cladding. Hans Brouwer, the project’s architect, explained by email that the form has two parts, “a louver-wrapped, suspended ‘cube’, and the ‘wrap’, which is shrouded in a perforated screen.” The “wrap” covers floors nine through 13, which are set back from the lower floors. Brouwer says planning regulations influenced much of the design. The building’s location across the street from both the city court and the Reunification Palace, of which the 13th floor terrace provides fantastic views, placed restrictions on height.

Brouwer says the cladding was designed to “cut out any direct solar gain, whilst allowing a high degree of natural, indirect lighting through.”

This efficiency is another prominent reason behind President Place’s LEED certification. The designed coolness of the interior means less need for air conditioning. Cluer added that the building will use about 50 percent less water than a non-LEED structure, and the air quality inside will be 30 percent better than in other buildings. There are also trees and other plants on the ninth and 13th floors, literally turning President Place into a green building.

These aspects of green design hint at the future of buildings in Ho Chi Minh City. Crane, from Savills, says that “demand for green offices is becoming more prominent. What we’re finding is that once companies shortlist us, the green aspect puts President Place ahead.”