On set at The Christina Noble movie 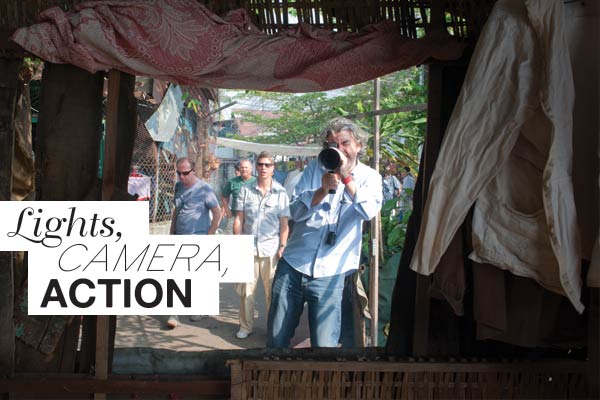 A European film crew camps out in Ho Chi Minh City to recreate the life of an Irish woman helping Vietnam’s street children — because she used to be just like them. By Lien Hoang. Photos courtesy of Noble film.

At the helm of one of Vietnam’s biggest children’s charities is a woman who knows a thing or two about childhood poverty. Christina Noble spent her early years living in Dublin slums, in an orphanage, and even in a hole she dug in the ground at a public park.

She went on to dedicate her adult life to making sure other youth don’t endure the same fate, a life now being captured for the silver screen.

“She connected with the street children because she’d been a street child herself,” director Stephen Bradley said in between shoots behind a market in District 5. Around him, the crew were lugging baskets of fake tangerines and eggplant, and passing one another ca phe sua da in plastic cups.

Noble’s eponymous foundation was, literally, a dream come true. In 1971, a year before Nick Ut’s photo of the naked Vietnamese girl covered in napalm, Noble had a dream about children fleeing a similar bombing amid the height of the Vietnam War.

“The ground under the children was cracked and coming apart and the children were reaching to me,” Noble is quoted as saying on her website.

She took it as an auspice of her future calling, providing education, medical care and job training to young Vietnamese.

The film, simply titled Noble, follows her struggling in Dublin and Birmingham in the 1950s and ’60s and getting her foot in Vietnam in 1989. Rather than tell the story from beginning to end, Bradley shuttles between the different times and continents.

“I’ve used the device, to-ing and fro-ing, so you can see the parallels in her life,” he said, setting his headphones on a railing while, below, crew members set up a scene in which a Vietnamese man christens Noble’s new house in Ho Chi Minh City with incense.

The 14 years that separate the filming from the latest events in the film posed a challenge for the crew. They had to look for and remove or avoid anachronisms while shooting around the city, such as the skyscrapers downtown or the newer motorbike models. “It wasn’t like this at all when Christina arrived,” Bradley blogged on the movie’s website.

Similarly, producer Melanie Gore-Grimes described the difficulty of working around the incessant honking and, in one location, the crowds of children just released from school.

“There’s an element of chaos but everything gets done,” said Gore-Grimes, wearing khaki pedal-pushers and a small backpack on set.

Perhaps most notably, some of the beneficiaries at the Christina Noble Children’s Foundation have small roles in the film.

“A lot of these children are extremely gifted and talented and it’s important to showcase that,” Nicolas Pistolas, Noble’s son and the foundation’s director, said in an interview at his office in District 3.

He added, “We’ve seen how confident Vietnamese children are, even on the street, the confidence to approach strangers on the street and sell their wares.”

Filmmakers spent about half of their eight-week filming schedule in Ho Chi Minh City, more than most major western films except The Quiet American, according to press officer Rob Harris. The crew is now wrapping up production in Liverpool.

Bradley, a Dubliner with grey locks that fall over his big blue eyes, admitted to using some creative license with the biopic. Music, for instance, takes on greater significance in Noble’s dramatised life than her autobiographies would suggest they did in reality.

But she did have a soft spot for singing, which Bradley said she did some nights after work to unwind. In a blog post, the director wrote that, after shooting one night at a piano bar in District 1, the owner approached the crew to tell them Noble really had sung there years ago. “Shiver down the spine,” Bradley wrote of the coincidence.

The movie stars Bradley’s wife, Deirdre O’Kane, who has worked alongside actors from Bridesmaids, Downton Abbey and Game of Thrones. The couple have wanted to make the film since O’Kane emceed fundraisers for the charity in Noble’s birthplace The foundation, which has expanded to Mongolia, runs mostly on donations from overseas. They discussed it with each other for a few years, and then with Noble for a few years more, before finally going ahead with production.

Noble and her family gave input on historical and cultural accuracies, but they didn’t have veto power. As Bradley said, “She was generous enough to say, it’s in your hands.”