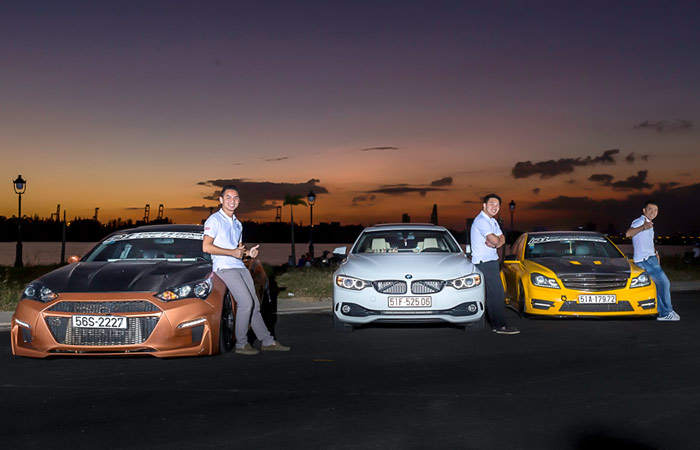 Lorcan Lovett buckles up for a drive with Vietnam’s ‘Drift King’ to learn about the trend for modified cars in the country. Photos by Vinh Dao.

Dusk has obscured the Saigon River into a black, empty road as we pull away from a sparse patch of District 2’s dockland.

A day spent with Vietnam’s Fast and Furious gang is coming to an end, although, all in all, it’s been quite calm.

“Want to drift?” suggests Le Hoang, 32, and, just as I tilt my head toward the driver, Le slams his foot down. We’re thrust forward before the blow valve of the US $90,000 machine lets out a ‘pssst’ as he lifts off the accelerator and swings the steering wheel.

The tail of the bronzed Hyundai Genesis Coupe whips around in an exhilarating and nauseating few seconds; a fervent reminder of my Welsh adolescence, when doing ‘doughnuts’ in a Citroen Saxo around any McDonalds’ car park gave you a certain ‘edge’.

Though I’m happy to say this isn’t some untrained teen trying to score peer points. It’s Vietnam’s undisputed ‘Drift King’, aka ‘DK VN’, and he’s been a pivotal figure in bringing modified cars to the country.

With 11 years of drifting experience, Le leads a 15-strong team at his garage, D1VN, and lends his high performance cars to films, music videos, and the promotion of The Fast and The Furious movie series.

Modified cars are still a rarity in Vietnam, but back when Le was growing up, owning a car at all was an exception.

“My passion began when I was young,” he says. “I loved cars but I lived in Vietnam. Back 20 years ago, cars weren’t popular.”

Every day after school he’d pass a Toyota showroom and gawp at the models on offer then get back home to ride motorbikes.

“It is in my blood. I like any vehicles, not only cars,” he says. At the age of 17, Le left to study in New Zealand where cars were not only abundant but also affordable.

He remembers driving his first car, a Mitsubishi GTO, to the garage where he volunteered for free until the boss recognised his talents and offered him a job.

Learning fast, he swapped the GTO for a Nissan s15 – “a very popular drift car around the world,” he says, particularly in Japan where the gliding practice was invented.

“A guy told me  ‘what the hell, you do not know how to drift? How can you have a drift car?’

“The guy was crazy because I did not know how to do it. From then on I did everything professionally and started to learn how to drift.”

In 2005, Le ‘qualified’ at drifting on racetracks after joining a bunch of enthusiasts who came together and created a league.

He returned to Vietnam in 2008 and two years later launched his first workshop in Go Vap that initially only modified cars.

Being Vietnam’s only ‘drifter’, he taught four others the skill, and the five usually use private land in Binh Phuoc Province to go practise.

As cinemas and video games boosted interest in the flashy machines, demand rose for D1VN’s services to the point that Le was able to fund a bigger place in District 7.

DK VN and his “boys” moved in six months ago and now offer repairs and modifications. They’re busy building a second floor office and specialised room for spray painting.

The Fast and The Frustrated

Caged songbirds duet with the rush and roar of powerful engines outside a shimmering metallic garage in District 7.

Inside, the “boys” work on a BMW M5 belonging to a 20-something regular customer and coffee shop owner.

“All my customers are young. They like cars too…some of them know about cars,” says Le. “Most people want to show off their money.”

“They treat their cars like wives,” chimes in Le’s cousin, 28-year-old Minh Truong.

“People say ‘I want it to be sexy, I want people to look at my car when I’m driving around’,” says Le, who refuses to modify a car if he thinks it looks bad.

It’s D1VN’s reputation on the line and that’s everything in this game.

D1VN has grown its customer base from 10 to about 30 per month. The business is a savvy self-promoter, with its own full-time media team who regularly post videos, interact with users, and create annual calendars of their customers’ cars that intend to flatter as well as retain clients.

The D1VN community has nearly 70,000 likes and, although reluctant to step into the limelight at first, Le, as DK VN, now has his own personal fan page after some convincing from his team.

“Now it is a big community of people, especially compared with five years ago,” he says. “They learn from the internet and from people overseas how to modify cars.

“They know which cars they have to buy. Before, all anyone knew was Lexus or Toyota.”

“…and The Fast and The Furious series means when they watch it, they want to be that cool,” adds Minh.

Since Fast 5, the team has been commissioned by the series to drive around Saigon for each premier (the latest procession featured seven cars for the seventh instalment).

Le has also helped organise a stunt show at Phu Tho Stadium in District 11 set for May. It’s an exciting time for the “boys” as 60-year-old Keiichi Tsuchiya – the original DK and The Fast and The Furious: Toyko Drift stunt coordinator – has agreed to take part.

Thai drifters who are friends of Le’s, and some homegrown talent, will join “the best in the world,” Le reverently hails, referring to the Japanese master.

We take a ride in Le’s Hyundai which has ‘Drift and Donate’ stickered to the windscreen in acknowledgment of D1VN’s charitable work.

Seated close to ground level, my vision quickly takes in a limping old man, a girl riding a bicycle, a stream of motorbikes, and then our surge of speed settles as another car pulls out.

Stolen thrills come in short bursts on the congested streets of Saigon.

“We feel frustrated that we can’t go fast,” Le says. “Obviously you can not race on the street. There are a lot of people; it’s very dangerous. Vietnam right now has just one freeway, and that’s with a speed limit.”

As the drive continues, Le reveals his next goal: to start training as a pilot this year and eventually control the ultimate machine. For now, he’ll drift along happily as DK VN; Vietnam’s unofficial representative in the global competition for customised cars.